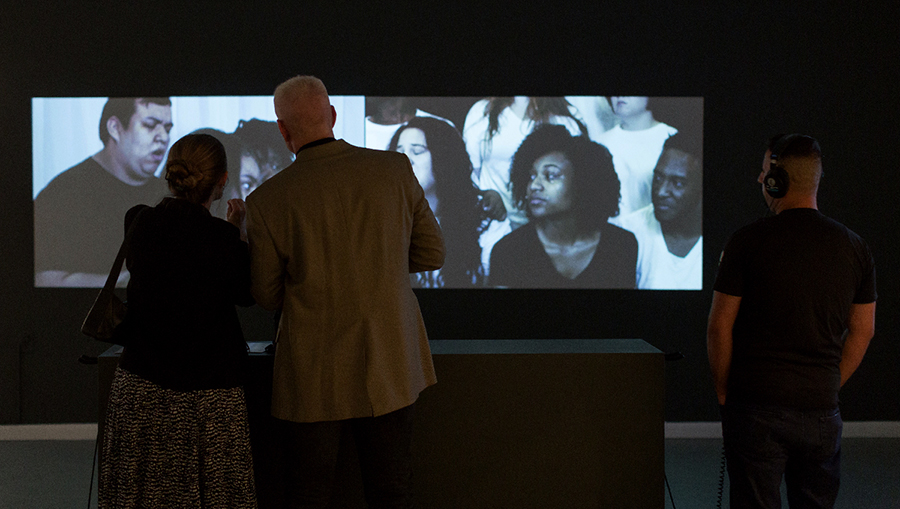 Mourners is part of a larger body of work called The Space Between Grief and Morning. It is an interdisciplanary series of works that metaphorically explores the process of grief and mourning in private and public contexts. In 2014, I lost my father. I had been his primary care-giver for over ten years, having moved him and my mother to live with me in Houston. During this time, I had taken care of every aspect of my father’s daily needs while witnessing the slow process of aging, disease, and its effects on the body. This body of work aims to take this very personal experience of loss and translate it to a larger audience by exploring grief and mourning in its various forms.

Mourners is a 2 channel 1080p video that incorporates Stereo and Binaural Audio. While conducting research on grief, I became fascinated by the role of professional mourners that is surfacing more in Western Societies. Hiring professional mourners is not an unusal practice in many African and Asian countries when there are few family members to actually grieve for the deceased. Mourners takes this topic and explores it in two ways by collaboratively working with actors and musicians. Within the piece, two groups of people are displayed on the screen. One set of people are actors and the other are a group of vocalists. I asked the actors to perform as mourners for a fictitious death. In addition, I invited Composer Nick Rissman to write an original choral composition to musically reinterpret people grieving that is performed by a group of vocalists. The piece is intended to be a dialog between the two group’s interpretations on being mourners while metaphorically speaking to our contemporary times. Headphones are employed to fully experience the transition that happens within the piece from stereo sound to a 3D audio experience.